These are my favorite French things for summer 2016. They are all available in the United States…except for a Frenchman’s joie de vivre. That one must be cultivated on one’s own.

Un. La Roche-Posay primer from La Vienne. I try to keep my skin care as simple as possible, so the idea of putting on a cream after moisturizer and before makeup seemed ridiculous. I could not have been more wrong. This anti-aging SPF 50 primer works so magically I haven’t even been wearing my tinted moisturizer. A drugstore luxury.

Deux. Saint James t-shirts from Brittany. It doesn’t get more classic than this. These shirts were first produced in the 1800s for west coast sailors and later gained a following among fashionable women when Coco Chanel began wearing them in the 1920s. Today, J. Crew carries Saint James. They’re pricey, but last years. (I’m still wearing one from 2004!) 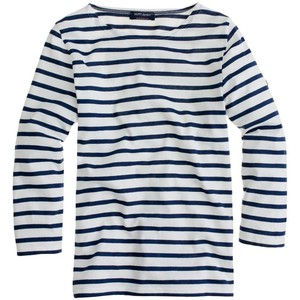 Trois. K. Jacques sandals from St. Tropez. This family-run company began producing sandals in the 1930s for beachgoers by outlining customers’ feet and then hand-cutting the leather to fit them. Today, K. Jacques’ grandchildren have expanded the business to reach many countries, but the company’s website still has the best selection. Another “pricey but worth it” purchase that will last many summers. 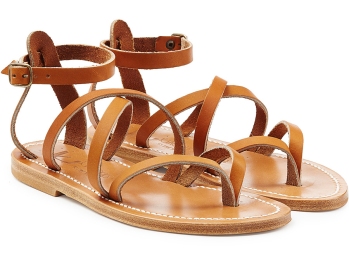 Quatre. Charles Heidsieck Brut Réserve Champagne from Reims. There are many bottles sommeliers would consider higher quality champagne, but for an affordable option for a summer evening you cannot go wrong with this one. Nicknamed “Champagne Charlie,” Charles Heidsieck is often credited with bringing champagne to the “new world” in the 1850s when he came to the United States with cases of his creation. Pairs with everything.

Cinq. Une petite phrase from Paris. I like to get excited…about everything. I like to use exclamation points. I say things are “awesome” and “amazing” when they are just good. This over-excitement about life is inherently American; the French do not do this. Even when they are bowled over by a meal, they will simply “C’est pas mal” or “it’s not bad.” It’s my phrase for the summer as I inch closer to becoming French…ish. (Want to try it? Say: say paw mawl.)

There was an error retrieving images from Instagram. An attempt will be remade in a few minutes.