There are many items fashion magazine editors and bloggers label as part of the French girl’s wardrobe–ballet flats, striped t-shirts, “le smoking” tuxedo jacket–but none is as eponymous and ageless as the simple scarf. Ageless in that the scarf has been worn around French women’s necks for decades and ageless in that teenagers and elderly women alike wear scarves on a near-daily basis.

Unlike modern American women (myself included) who tend to favor pashminas and long rectangular cotton scarves looped around their necks, French women embrace the small silk scarf. I believe a lot of American women wrote the silk scarf off as something only their grandmother or someone who can afford Hermés wears…but the modern French woman wears her scarf as an expression of her individuality.

Put the “statement necklace” away and try wearing your scarf like a French girl. A few ideas:

“The Outlaw” is what I call this look because it reminds me of old Western films in which cowboys would wear bandanas over their noses and mouths to “stick ’em up” while robbing a saloon. In truth, this look became popular in the 1970’s. A small square scarf or bandana works best for this look. (I know I’ve said it before, but bandanas are BIG this year in fashion.)

Simply fold the scarf in half to make a triangle. Put the scarf around your neck with the triangle pointed down your back and make a double knot with the two points in the middle of your neck. Leave the scarf a little loose, so it is not uncomfortable. Flip the scarf around so the knot is under your hair and voila.

A few shopping ideas for “The Outlaw”: 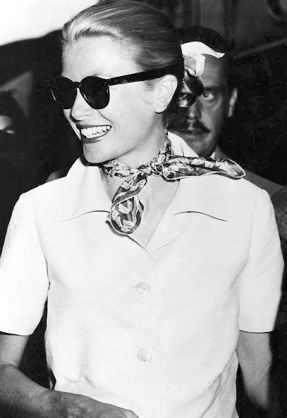 “The Stewardess” is what I secretly call this look. I almost didn’t use that moniker here because I think modern American women shudder when they see “stewardess” and “fashion” in the same sentence–as if we are suddenly reduced to a 1960’s stereotype. The truth is, this look is sweet and retro; and looks youthful on any neck. This scarf tie looks especially fabulous with a classic white blouse or a crew neck t-shirt (like both of the images above). Again, a small and square scarf works best for this look.

Fold the scarf in half to create a triangle. Using a flat surface, fold the widest part of the scarf triangle over and over in two-inch increments until it reaches the pointed side of the triangle. Wrap around the neck and tie in a small double knot. Place the knot jauntily to the side or even at the back of the neck to create a gamine look.

If you have a bigger scarf, you can still create this look by going twice around the neck before knotting. This look is even more French girl. I love these directions (below).

A few shopping ideas for “The Stewardess”:

Put those long, rectangular scarves that you already own to good use with this modern scarf look I’m seeing more and more on the streets. I believe a thin leather belt works best with this look, preferably worn over a dress so the scarf doesn’t bulk up around the waistband of jeans or pants. This would also look smashing over a monochromatic shirt and skirt combo.