Paris may be for lovers, but the 16th arrondissement is for the rest of us: People with toddlers.

The western Parisian neighborhood between the Seine and the Bois de Boulogne, runs from the Arc de Triomphe in the north down to the Roland Garros stadium in the south. The quiet quarter, also known as Passy, is where Benjamin Franklin lived for nearly a decade. He would go out to Versailles on diplomatic missions and apparently tried to introduce cornbread to the French. When he returned to the U.S., Thomas Jefferson wrote “When he left Passy it seemed as if the village had lost its patriarch.”

Luckily, Passy managed to flourish without him.

The first two times we stayed in the 16th, the pre-bébé days, I’d take the metro daily across the city to visit the BIG museums and the fancy shops. I’d walk up and down the busy boulevards and only stop at the most popular cafés. Those were the days when I had the energy to see and do everything The New York Times said I should see and do. These days I’m lucky to read one NYT article a week. The two times I’ve stayed in the 16th with bébé in tow (now toddler, but the French do not have a word for such a creature) I was happy to stay put.

From the Haussmann-style architecture to the chestnut tree-lined streets, you can experience all of the charm of Paris from here. Honestly, I don’t remember why I even left. If you are planning a trip to Paris with or without children, here’s why you should consider the 16th. 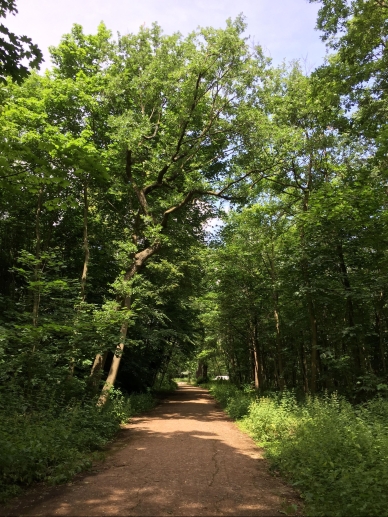 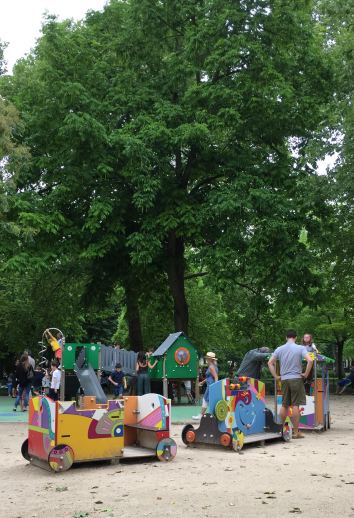 Children need time to run around in a park if they are going to sit quietly later while you sip rosé in a café. We stayed directly across from the Jardin du Ranelagh where I took my son daily, post-croissant/pre-nap. We were both happy campers. The park has plenty of green space for picnicking, as well as three, fenced-in playgrounds that are organized by age groups. (Side note: Having fences around playgrounds for toddlers who just learned how to run is ingenious.)

One afternoon we saw the Marionnettes du Ranelagh in the park’s tiny theater. You get the sense that the plots haven’t changed in 50 years and it’s about as adorable as it gets. Everyone is encouraged to join in the heckling and cheering of the marionettes. The show runs every Saturday, Sunday and Wednesday afternoons. Tickets are 3.50 euros for adults and free for children under the age of three.

For a change of scenery, head to the Jardins du Trocadéro where you can see the Eiffel Tower from the playground. There you will find fountains, crêpe stands and an antique carousel we couldn’t resist riding twice.

After you’ve exhausted all of the Passy parks, spend a day getting lost in the Bois de Boulogne. At 850 hectares the former royal hunting grounds are slightly larger than New York’s Central Park. Tucked inside you will find lakes with row boats, Chateau Madrid and a family-friendly restaurant Les Chalet des Iles. (I highly recommend getting around the Boulogne on rental bikes — this company will deliver them to your door.)

On the north side of the park is the closest you can get to Disneyland without actually having to go to Euro Disney: Jardin d’Acclimation. The renovated jardin re-opened on June 1st, complete with a number of roller coasters, paddle boats, wading pools, exotic animals and manicured gardens all catering to children. I promise parents won’t find it garish either. I had a lovely afternoon watching my toddler chase ducks while I enjoyed a glass of wine at it’s gourmet restaurant. Tickets run from five to 29 euros. Children under the age of three are free.

The other reason to visit the Jardin d’Acclimation is that it is attached to the ultra cool Fondation Louis Vuitton Museum. If you have more than one adult, you could take turns going into the museum. Or bring the children into the galleries to see the out-of-this-world contemporary collection. The architecture alone is worth a look. 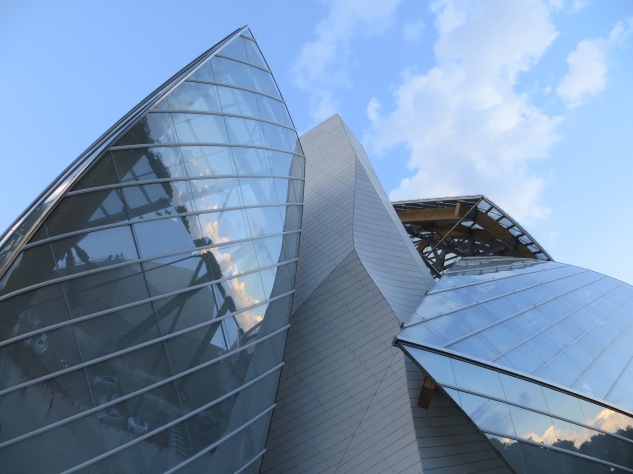 If you’re craving art that feels a bit more traditional, I recommend the Musée Marmottan Monet just off of Jardin du Ranelagh. This museum has the largest collection of Monet’s work housed in a 19th century manor, including his seminole Impression, Sunrise. Go in the morning when the museum is practically empty and head straight to Monet’s collection on the underground floor. Tickets are 11 euros for adults, 7.50 for children and free for those who are younger than seven. You will not be missing the lines and selfie sticks at the Louvre, I assure you!

(Read more on the Fondation Louis Vuitton and Musée Marmotton.)

As for shopping, skip the crowded Champs-Élysées in favor of the 16th’s Rue de Passy. Check out the wine cellar at the city’s most expensive grocery store, the sleek La Grande Epicerie de Paris. Or go the local route and shop for fromage at the Marché Couvert de Passy. Turn off on Rue Guichard for children’s stores such as Petit Bateau and Natalys. Keep walking down Rue de Passy for my favorite French boutiques: Claudie Pierlot, Repetto and Bernice. One place I always stop by in Paris: Le pharmacie.

Dining out with a toddler can be tricky in any city. In Paris we followed a pretty regular pattern: Sit at a cafe in the morning and face his stroller towards all of the exciting sidewalk traffic (La Rotonde de la Muette has the best cappuccinos and croissants, No. 41 serves a bacon and eggs breakfast), attempt a white tablecloth lunch (Restaurant La Gare is child-friendly and has a fantastic ambiance) and either share a picnic dinner or get dinner delivered after the baby has gone to sleep. We used Deliveroo Paris for sushi one night and were in heaven.

If your little one falls asleep in his stroller while you’re walking around the 16th, make a beeline for Hôtel Raphael’s rooftop bar. The cocktails are shockingly expensive, but the view of the city is unrivaled.

We tried to recreate a photo taken one year ago, but a sleepy baby is far more willing than a grumpy toddler to oblige. Which brings up the question: “Why even bother traveling with a toddler?”

I won’t lie. Paris is far more complicated with the under three age group. It is the least stroller-friendly city I’ve ever encountered. It is dirty, loud and unapologetic. I was forced to move at the toddling pace of a 14-month-old who gets distracted by every dog. (Note: There are a lot of dogs in Paris.) Instead of fighting it, I slowed down and rediscovered the magic of Paris from my childhood.

Have you been to Paris? Do you travel with your toddler? Share your stories with me.

2 thoughts on “A village in Paris: The 16th arrondissement”